Our first ever Junior Surf Series came to a celebratory conclusion last week at England’s only inland surf destination, the Wave in Bristol. We were stoked to welcome some of the best of English U12 and U14 girls and boys for the grand finale of the series, “The Day of Champions”, pushing the performance of our top junior surfers.

This year’s brand-new series of grassroot contests, sponsored by Eola and Animal, had seen 3 stops throughout the year – Croyde in March, Praa Sands in September, and Widemouth Bay in October.

In the spirit of celebrating the surfing community, Surfing England reached out to their affiliated clubs to help run the events, one stop at the time. Surfing England have provided some financial and practical support to get the series off the ground, as part of our wider goals to see more contests running in 2023 and beyond.

‘’We wanted the junior surf series to give groms their first taste of competitive surfing in a really friendly and welcoming environment, and working alongside our surf clubs the series has done just that.  To run the finals in a team format, bringing in some of our awesome pro’s as team captains and delivering a super fun day full of camaraderie was the perfect way to finish the series’’ Ben Powis, CEO of Surfing England

The idea to wrap the series up as a Grand Finale has always been there, and the final format of the day offered our surfers a less traditional day of competition, featuring a team element and coaching input from England’s finest. The day brought together 4 professional English surfers, 19 of the best young grommets, all invited to enjoy 4 hours of world class clean waves at The Wave, Bristol. 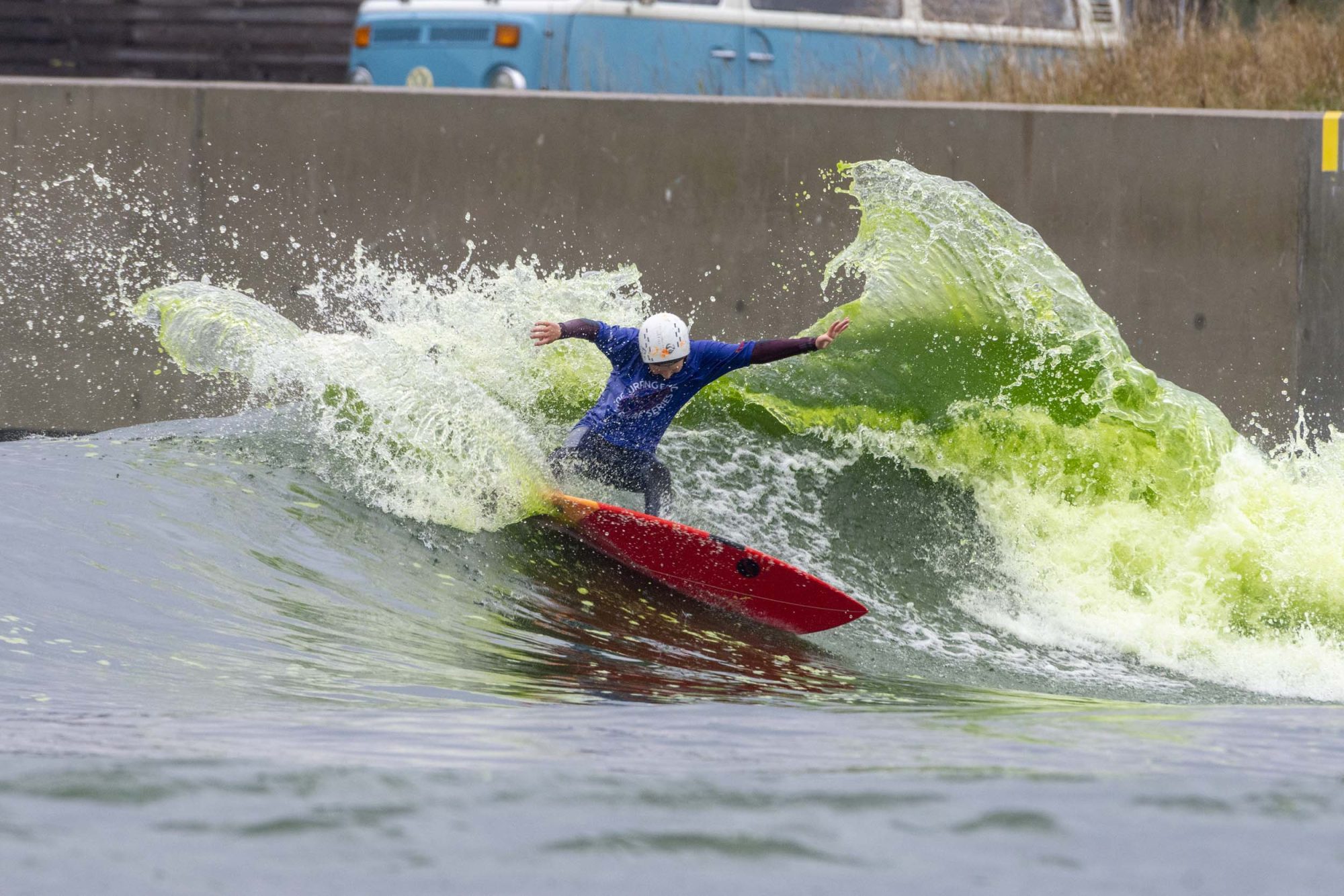 The aim of the day was set – to push the limits and come out from the pool performing the best manoeuvres to date. Our 19 surfers were divided between 4 team captains, Luke Dillon, Barnaby Cox, Lucy Campbell and Liam Murray-Strout. Teams were getting judged alternatively a set at the time, for commitment and effort dedicated to 1 critical manoeuvre per wave, accumulating points throughout the day.

At lunchtime, every team got an opportunity to review and analyse their waves from their first wave pool session with their captains and refuel from The Wave’s café.

In the second session teams, captains and competitors showed their true colours and gaps amongst the team’s performances started to show.

Luke Dillon and his TEAM WHITE snapped up the champion titles, 4 points ahead of Barnaby Cox’s TEAM BLUE. TEAM RED lead by Lucy Campbell and TEAM YELLOW with their captain Liam Murray-Strout, were both hanging closely behind. 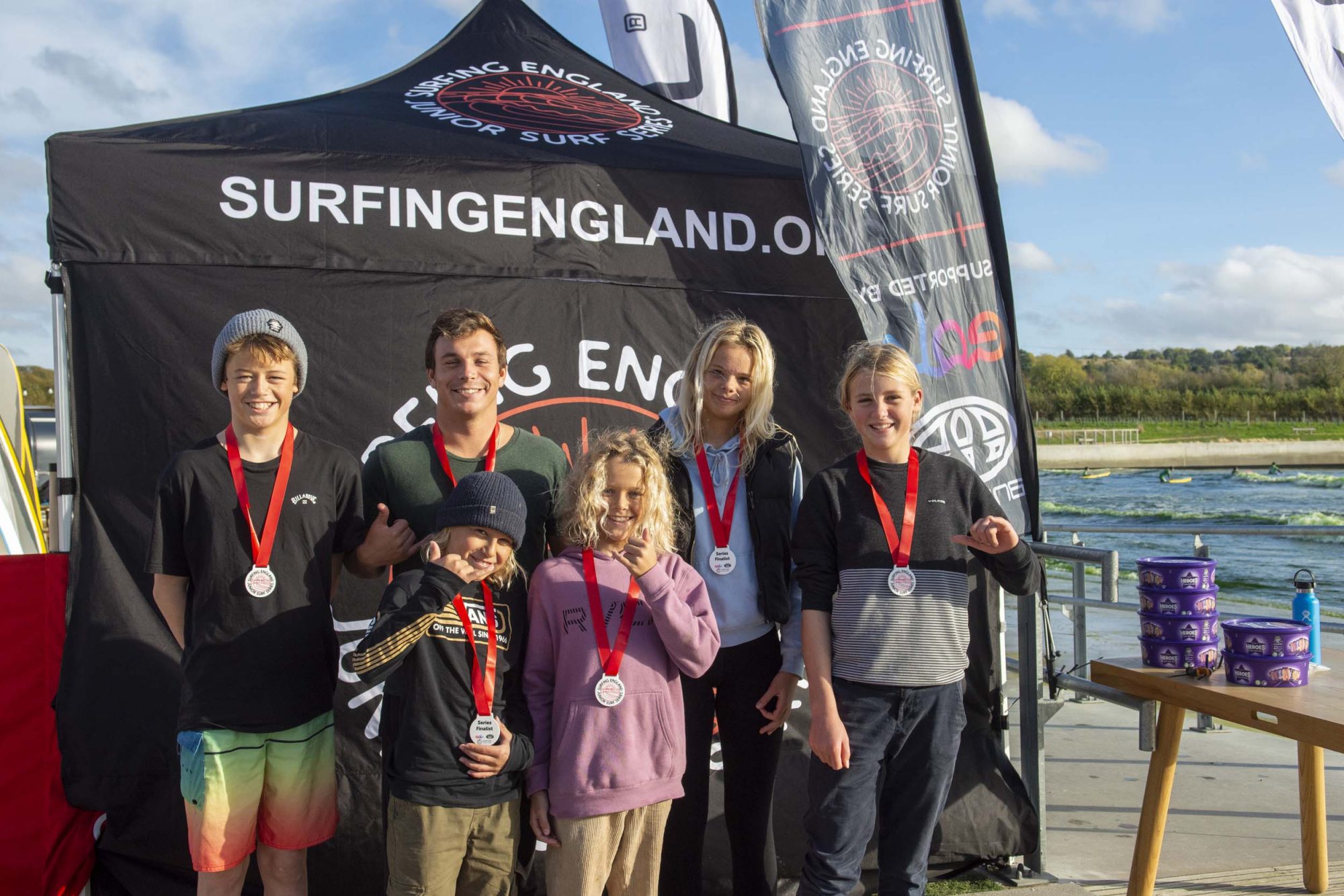 ‘’Surfing England Junior surf series Co-ordinator Phil Williams said ‘ Working with the five surf clubs, sponsors and of course Surfing England and the Wave was a real privilege, and yesterdays finale was a reminder, of what the series was aimed at, investing  in the next generation of competitive surfers without losing the fun of the sport we all love, excited to see how the tour develops in 2023, a huge thanks to all  the competitors and support crew that were involved, and of course sponsors Eola & Animal UK ’’ Phil Williams, Junior Series Contest Director

“What a marvellous way to end this incredible series! 2022’s Day of Champions, the finale of the SE Junior Surf Series, was unforgettable. So much talent was on display on the waves. Everyone’s enthusiasm for the sport was inspiring and we couldn’t be more thrilled to be co-sponsoring the series this year with Animal. Seeing such successful pro surfers using their years of experience to share with the industry’s future stars has been wonderful. This series is an opportunity for young people to not only showcase their skills and compete, but to also immerse themselves in the world of surfing with fellow enthusiasts and have fun. We can’t wait to see how they continue to thrive as they keep learning and taking part.” Callum Hemsley CEO & Founder  of EOLA

A huge thanks to series sponsors Animal UK and EOLA, and of course all the competitors and their support teams. A huge thank you to all the surf clubs and volunteers who have helped us deliver a fantastic series of events for the juniors.