With surf forecasts proving tricky, Contest Director Phil Williams made the call to split the event into two halves, which culminated in two incredibly fun weekends in Croyde with exceptional surfing on show. Read on for the write ups of the two halves…

Organisers of Part 1 of the 30th Jesus Surf Classic, which took place at its traditional venue of Croyde in North Devon, were overjoyed to see a larger than predicted swell pushing into the bay from early in the morning on Saturday 17 September 2022.

After deciding earlier on in the week that there would not be enough swell to run the whole of this large event in one weekend, Phil Williams, Contest Director, decided to split the event into two parts. This first part was very much focused on the groms, and separate categories for boys and girls were added in the Under 12 and Under 14 categories with great success. The volunteers, who have been key to the success of the contest over the last 30 years, worked hard on Friday to make sure that the contest site was ready for check in at 8 am on Saturday, when the BBQ was fired up, hot drinks were ready, and commemorative T-shirts and mugs were in the goody bags. The day started with a minute’s silence to reflect the passing of the Queen, which was a poignant way to start the 30th event.

With just one peak being used throughout the day, progress was rapid and Enya and Lisa, who had volunteered to do water safety, did an amazing job ensuring that the line-up remained clear throughout the day. Thanks also go to Croyde RNLI who, as always, supported this event and gave their assistance should anything untoward have happened.

It was fantastic to see the youngest ever competitor, a young man called Jude, competing at the age of six in his first ever surf contest and doing himself proud by getting third in his first-round heat, just missing out on going through.

The groms always bring a huge number of smiles, energy, and excitement to these events and Saturday was no different. The event kicked off with the Under 14 Boys quarter finals, rapidly moving on to the Under 12 Boys quarter finals, before the girls started in their semi-final heats. The standard in all categories was really great and many of those entered had also competed in the Surfing England Junior Surf Series the previous weekend at Praa Sands. In addition, it was great to have some surfers who travelled all the way from West Wales and Jersey.

The standard of girls surfing continues to rapidly improve with some stand-out performances in both categories. 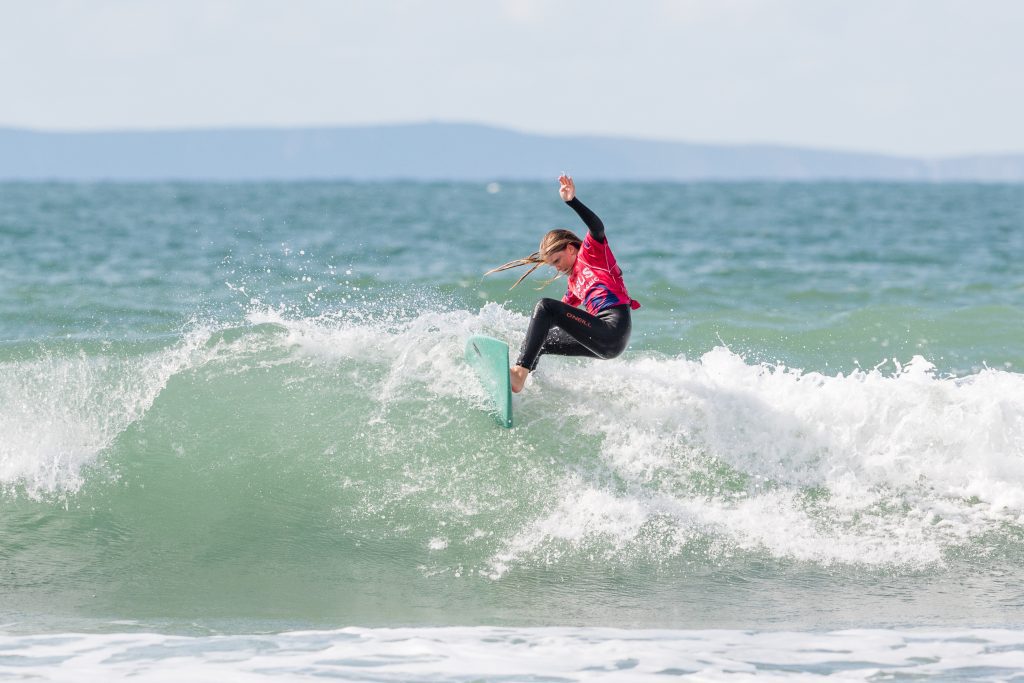 The contest site remained busy throughout the day with live music, and great refreshments. There was also an exhibition focused on some of the previous 30 years of the event, along with one or two historical displays from the Museum of British Surfing.

By midday on Saturday, we were into the finals, starting off with the Under 12 Girls which was taken for the first time ever by Lila Skinner with a commanding performance on the back of her previous week’s win at Praa Sands. Wales’ Josie Hawkes was second and local girl Daisy Myers just got into third ahead of Kira Connolly from South Devon.

Next up was the U12 Boys final, again very keenly contested, with Harvey Waters from Newquay taking the win ahead of Joshi James on a rich run of form in the Junior Series, with Evan Dakin taking third and Levi Renaud in fourth.

The Under 14 Girls final was great to see. Lila Skinner came in fourth place, just behind Sunny Ingram from St Agnes, with Josie Hawke again in second; a great performance all round. Harlyn Sykes from Helston took the win in style, surfing strongly throughout the contest.

By now the surf was quite chunky for the competitors, with a little bit of onshore wind compared to the glassy conditions of previous rounds, which made for a great spectacle for the Under 14 boys to show their skills. Fair to say that Lukas Skinner ended up getting two very strong waves in the final to take the heat, followed by Dylan Roose from Plymouth, and Heath Gillespie who has been performing really well in the Junior Surf Series taking third, with Sebastian Connolly from the south coast in fourth.

The presentation took place in bright sunshine with Annie Williams sharing what life has been like married to contest director Phil for the last 30 years with the ups and downs and challenges of running this event, and also sharing some moments where the importance of faith has really shone through, including, we believe, the extra surf that appeared this Saturday!

Trophies and prizes, including cash, were handed out to all the winners and special mention should be made of the first-place trophies designed by Lisa at LRartUK, which were absolutely stunning.

From there, some of the competitors and many of the volunteers moved to Café Croyde Bay for a very pleasant evening of food and chill, no doubt reminiscing on the day’s events. 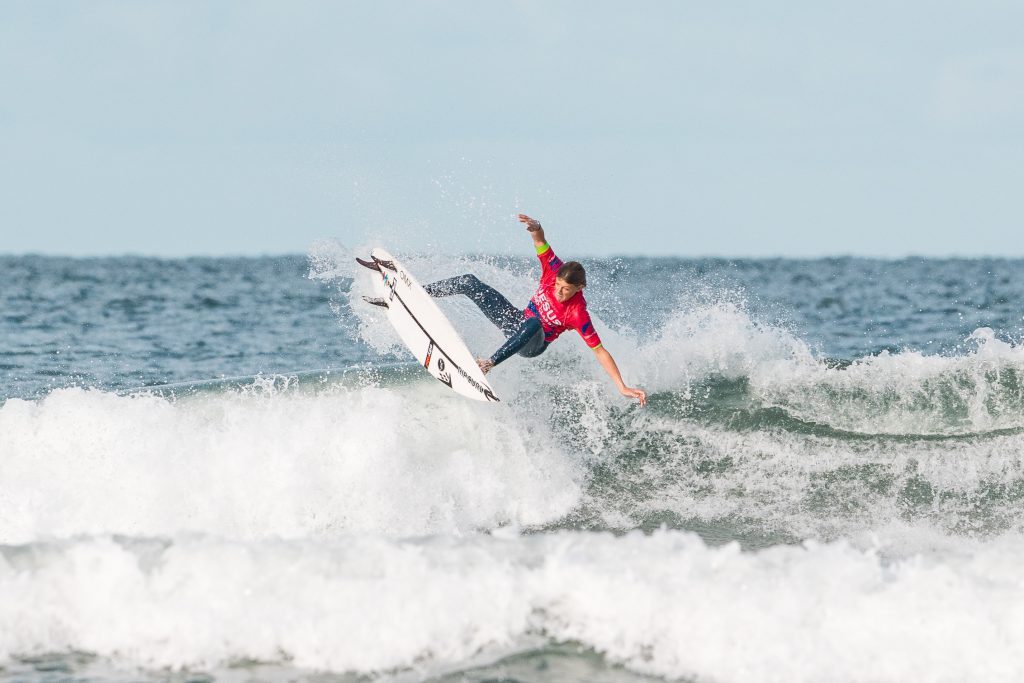 As there was a free day on the Sunday it was only fitting to have a simple celebration of 30 years of the Jesus Surf Classic, with around 70 people from local churches and the volunteers gathering in the sunshine to give thanks for 30 years.

The date for the rescheduled events for the other six categories has been set for the 8 & 9 October and at this stage, due to the popularity of the event, the only category with space is the Women’s Open. We are not planning to open up new categories as there are already a large number of people on the reserve lists. If this changes in the week before the event, we will communicate.

So despite splitting the event into two, there were so many benefits; having a real focus on the groms gave them the limelight and they certainly didn’t let us down. Huge thanks go to so many people who have invested in this series over the years and we couldn’t have run it without them. These include Parkdean for the use of their land, RNLI, local churches, and cake bakers who continue to come up with the goods, the amazing Christian Surfers volunteers from around the country who give their time freely to serve at this event, and of course the surfers and their support teams who sign up year after year. One final thanks to God for providing the waves and the playground which we all love.

Can’t wait to see you again on 8 & 9 October and, in advance of that, the 14th Jesus Longboard Classic takes place at Polzeath over the weekend 1 & 2 October. Very few places remain for the JLC but if you do want to enter go to www.christiansurfers.co.uk/register/jlc22/

In the end, a fitting day to celebrate part one of the Jesus Surf Classic 30th anniversary. If you would like any more information on Christian Surfers UK, follow the Facebook page or Instagram or at www.christiansurfers.co.uk

Well they do say all things come to those who wait, and after dividing the 30th Jesus Surf classic into two parts due to lack of swell on the Sunday of the first weekend, it was fantastic to see some clean-ish swell lines rolling into Croyde Bay on Saturday morning for the start of weekend number two.

The first part of this very popular and busy event saw the under 12’s, and under 14’s  both boys and and girls battling it out in some great conditions, and so for this weekend there was scheduled to be six remaining categories to be completed, involving just under 100 surfers, including many of the top surfers in their particular categories.

Organisers Christian Surfers UK had decided to ensure that it was equally as good a celebration as the first-time round, so erected a marquee, fired up the barbecue, baked the cakes and welcomed everybody prompt at 8 am with hot drinks. 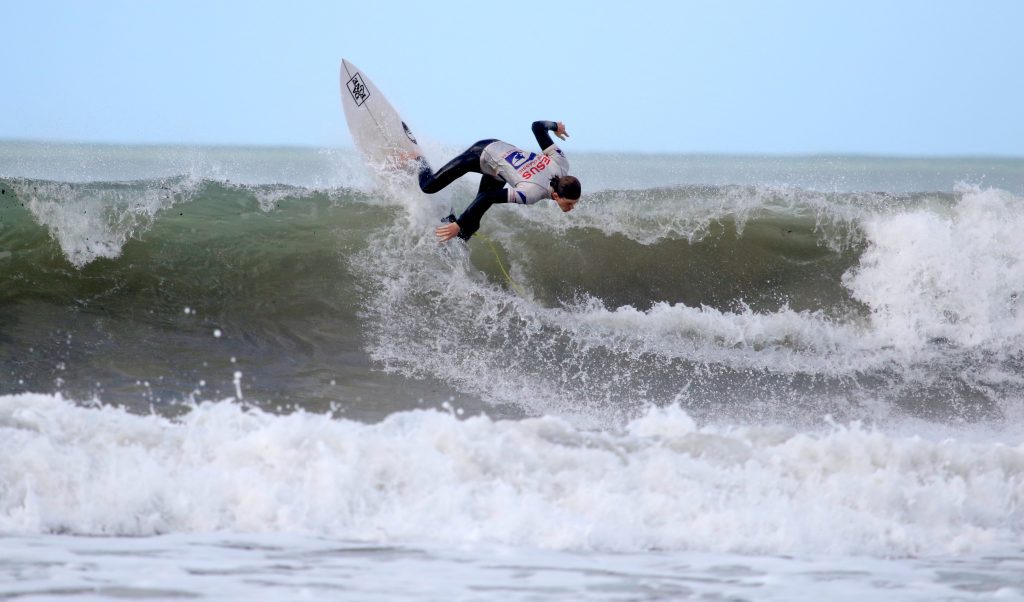 It was pre-planned again due to swell forecast that there would be four categories running on the Saturday, and then following up with the final two categories on the Sunday.

That meant a really busy 27 heats were run on Saturday, and the swell continued to roll through and in fact as the winds lightened got cleaner which saw some excellent surfing in all four categories.

Some highlight results from the Saturday included Reen Boudon-Inoue from Newquay winning the under 18 boys, ahead of Malakai Hagley, and Rob Watson from Saltash winning the very competitive and always popular over 35’s title, ahead of both the Wells brothers (Danny getting 2nd) and local music legend Charlie Charlesworth.

In the women’s open a really dominant set of heats from Lucy Campbell winning the title and cheque of £350 for the first time in a while, it was great to see her back, but also good to see up and comer Belle Betteridge getting second and multiple Welsh champion Emily Williams taking third spot. Bea Howell from the Isle of Wight made the trip worth her while with a good fourth place finish.

The open men’s division was very hotly contested with some great surfers and surfing throughout, seeing Wales’s Logan Nicol taking the title ahead of local Beau Betteridge, Barnaby Cox, from Bude and Sam Taylor. 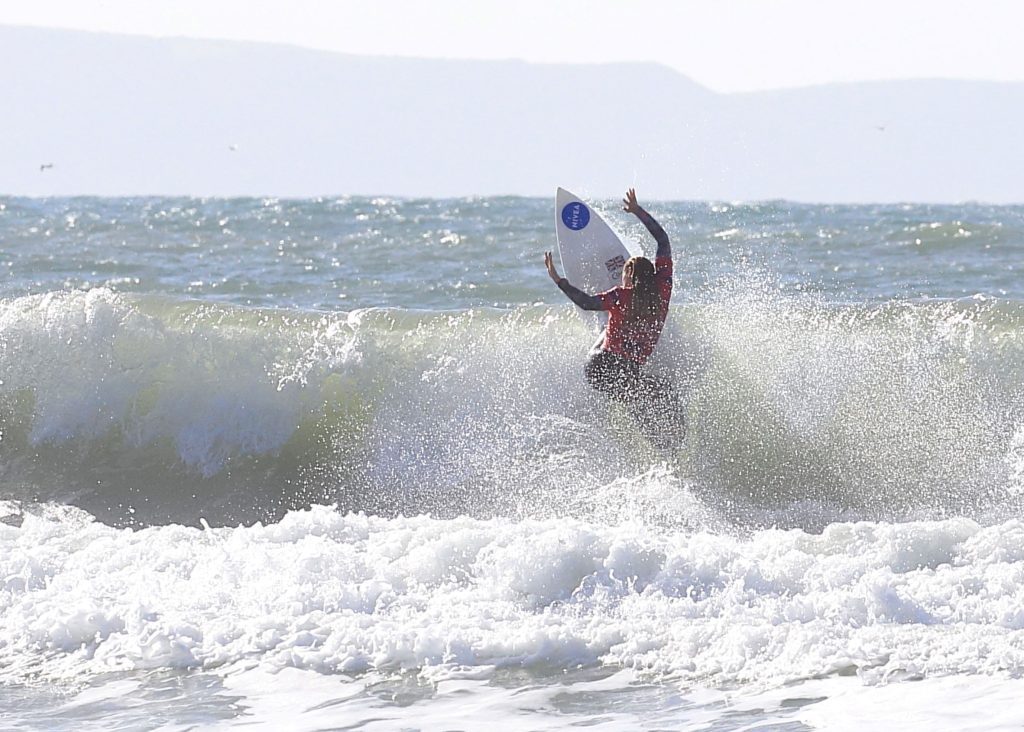 The presentations took place in bright sunshine and with the sun setting it was the end of a great first day, and many retired to Café Croyde Bay who had laid on a great chilli meal for competitors and helpers alike, a big thanks to them.

Contest director Phil Williams was very relieved to see a few swell lines rolling in through the bay on Sunday morning bright and breezy, definitely a colder morning, but with slight south-easterly winds it meant the under 16’s and under 18 girls could get underway.

As a spring tide dropped out conditions became a bit more challenging towards low tide but surfers in both categories did fantastically well to close the event out around 1 pm. In the under 16’s which was hotly contested Lukas Skinner took the win ahead of local ripper Malakai Hagley, with Arthur Randall third and Finn Gillespie from Newquay in fourth. In the girls under 18 it was local Belle Betteridge taking the win ahead of Lila Skinner (Perranporth) with Alexandra Husson from Helston third and local girl Daisy Lambert coming in fourth doing really well in the final.

At the presentations Mike Scott (one of the Christian Surfers Trustees) who was the only person to have attended all 30 of the events was interviewed about his life and his faith and the importance of faith in his life. The surfers, and their support teams were thanked along with so many others who make this event possible. Special mention this weekend to all the volunteers from CS, the local churches, Parkdean, Pentire Clothing, RNLI, and local water safety teams, Hotdoggers for the use of their trailer and of course all of the local surfers for sharing their waves for the weekend.

We very much looking forward to seeing everybody in 2023 provisional dates 9th & 10th September but also welcoming the longboard community to the Jesus longboard classic at Polzeath over the weekend 28th 29th of October.

Any further questions about the work of Christian surfers UK log onto www.christiansurfers.co.uk  or email [email protected]

All in all, whilst not quite the way we anticipated celebrating the 30th Jesus Surf classic over two weekends, great surfing, amazing community spirit, and sharing it with over 160 of the surfing community, a great way to end 30 years of ‘The Jesus’.