The most talented groms from all corners of the UK converged on Fistral Beach, Newquay for the 2022 Rip Curl Grom Search. Surfers were greeted with sunny skies and absolutely pumping 3 – 6ft surf rolling through the weekend.

One of our favourite comps of the year, the Groms put on an epic display of surfing, adjusting style and strategy to suit the sizable conditions, and showcasing the level of talent coming through the UK ranks. Read on for the write up, full results below.

Arriving on the beach for an 08:00am check in on Saturday, it was a chilly but sunny start to the day with solid overhead sets rolling through, almost double overhead on the gromscale! Under 16 boys’ and girls’ heats ran through the morning followed by the under 14s. The conditions were tricky with bigger sets cleaning up the line-up and lots of water moving across the beach. Lots of decisions for the young competitors to negotiate – which channel to pick for the paddle out, where to sit in the shifting line up, how to avoid the rip running through the north end rocks and which waves to pick as the sets rolled through. Picking your spot and wave selection proved critical to avoid the clean ups and get into the higher scoring potential and steeply walling lefts and rights.

With conditions still big, our Contest Director Pauly Jeffrey made the call to postpone the under 12’s to Sunday. Safety is always number one priority and with a quick shuffle of the schedule on live heats we were able to crack on with under 16s and 14s quarter and semi-finals.

It was a great call by Pauly as Sunday morning saw light winds and glassy 3 footers on a 13 second period rolling into North Fistral – perfect conditions for the under 12’s. After ten heats of fierce surfing from the Grom’s and with the offshore wind picking up we kicked off the finals. 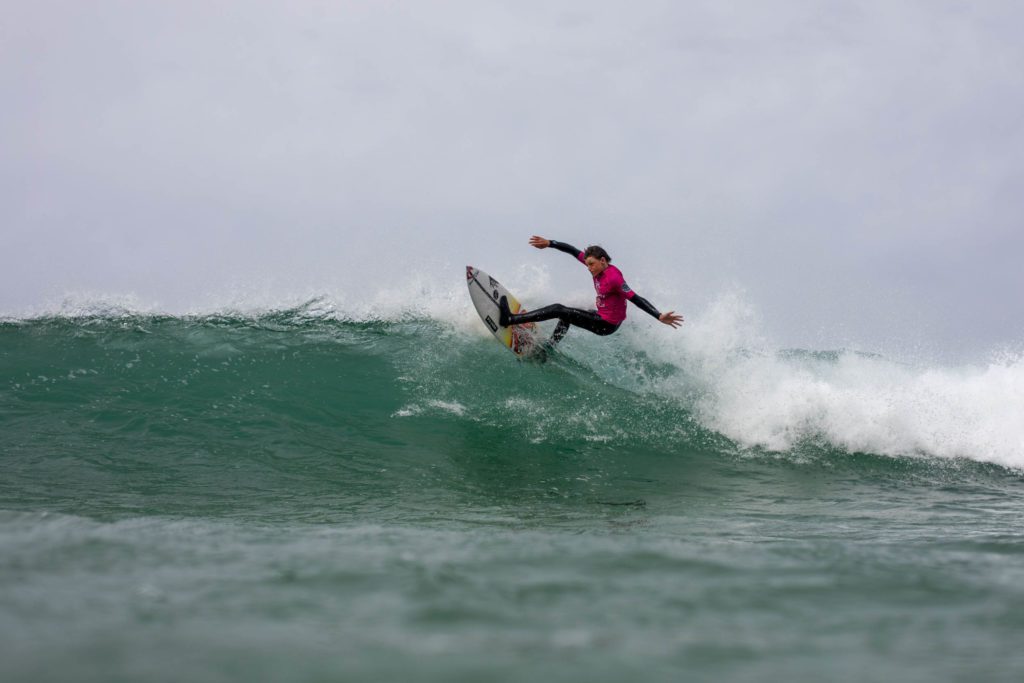 The girls’ finals ran first with Josie Hawke putting down a solid combination score with her first two waves and holding on for a well-deserved victory in the U12s. The U14 Girls final was another classic with Bethan Davies taking top spot and laying down the biggest scoring wave of the final. The U16 girls was possibly the heat of the weekend, stacked with talent and an epic battle between Lauren Sandland and Belle Betteridge. Amazing surfers with very different styles, it was Belle who clinched the victory with 11.43, just 0.07 ahead of Lauren!

The boys U12 final kicked off just after midday with Harvey Waters putting down the highest single wave score for his age division and going on to take the win. The U14 boys’ final didn’t disappoint with some exceptional surfing, a great battle between Lukas Skinner and Heath Gillespie with Heath emerging for the win. Last up the U16 boys saw the busiest heat of the comp, with 32 waves caught in 20 mins, the judges were kept on their toes as Fynn Gillespie made it a Gillespie double as he surfed to the top spot. 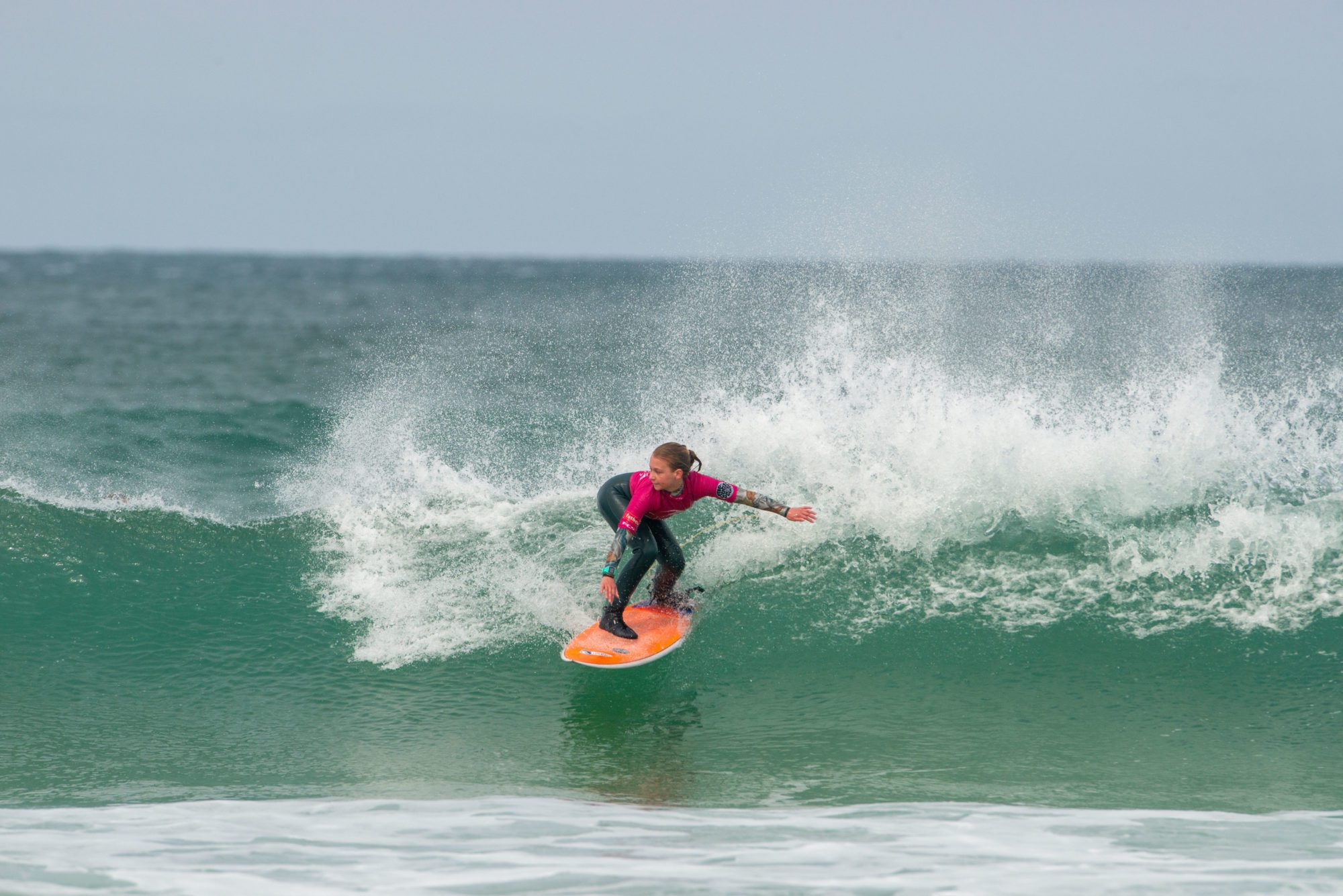 “As ever, the crew at Surfing England did a first-class job hosting our legendary Rip Curl Grom Search comp and we couldn’t have asked for better conditions. The standard of surfing was so high and it’s a privilege to be able to keep supporting these groms as they grow and develop” – Jay Vilarrubi-Smith, Rip Curl UK.

“What a weekend! Fistral produced the goods with outstanding conditions and the groms stepped up to the plate across all the age divisions to put on a show with some exceptional surfing. It was an absolute pleasure to host and to have juniors from across the UK coming down to Newquay. The vibe on the beach was very special, with surfers and families supporting each other and sharing in the joy of each competitor’s success, whether that was gaining the confidence to step into a competition rashie for the first time or taking an event win. The depth of talent across the UK is growing fast and Grom Search continues to play a crucial role bringing juniors together to compete and form new friendships on their surfing journeys”. – Ben Powis, Surfing England.

A huge thank you to Rip Curl for continuing to be the leading major surf brand in supporting domestic competitive surfing. Thank you to the 18 strong crew of Event Staff that made the event possible including ERA lifeguards, and to Panoptic Motion and Nicko photo for joining the media team.

Thanks to the parents and families, many of whom drive long distances to be at the comp and helped to create a wonderful atmosphere, and most importantly to the competitors who brought with them huge stoke and enthusiasm, acted with sportsmanship throughout and gave us some epic surfing performances which will live long in the memory. 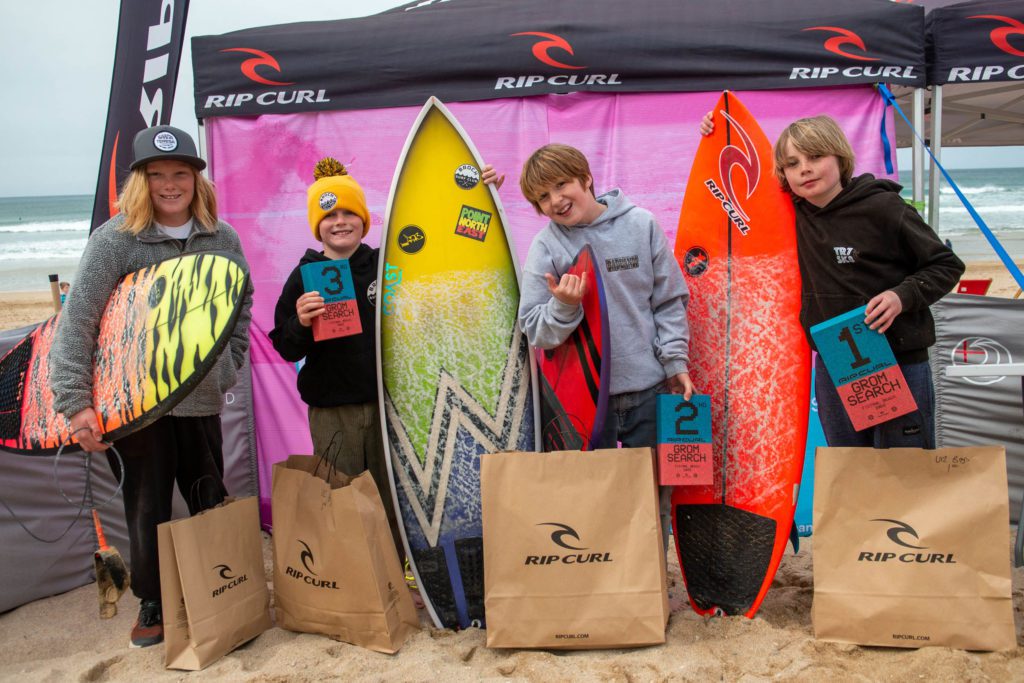 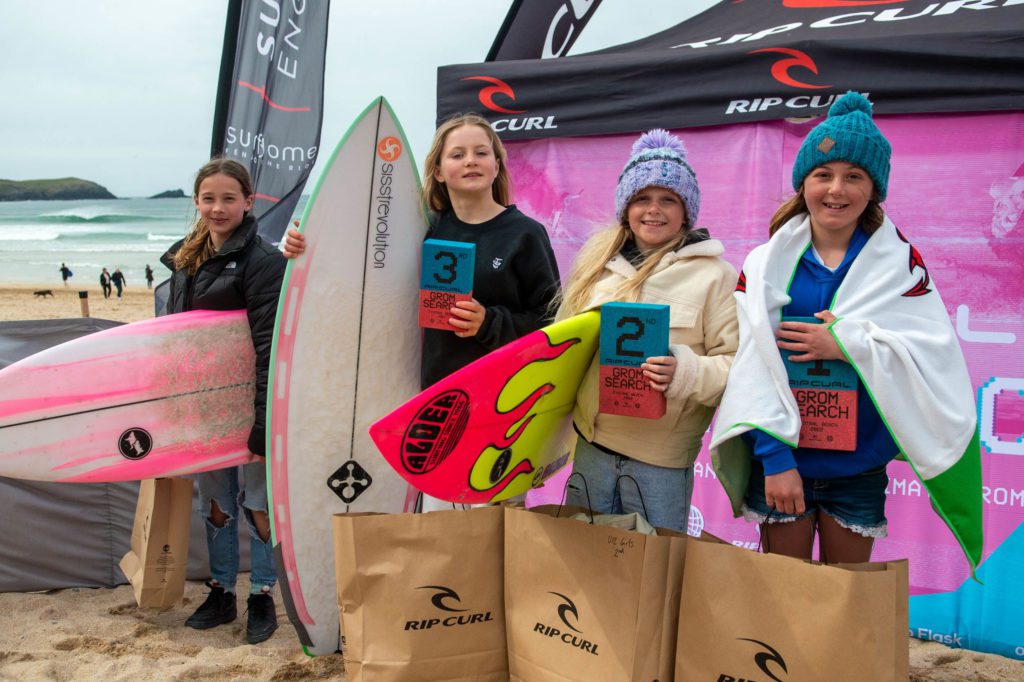 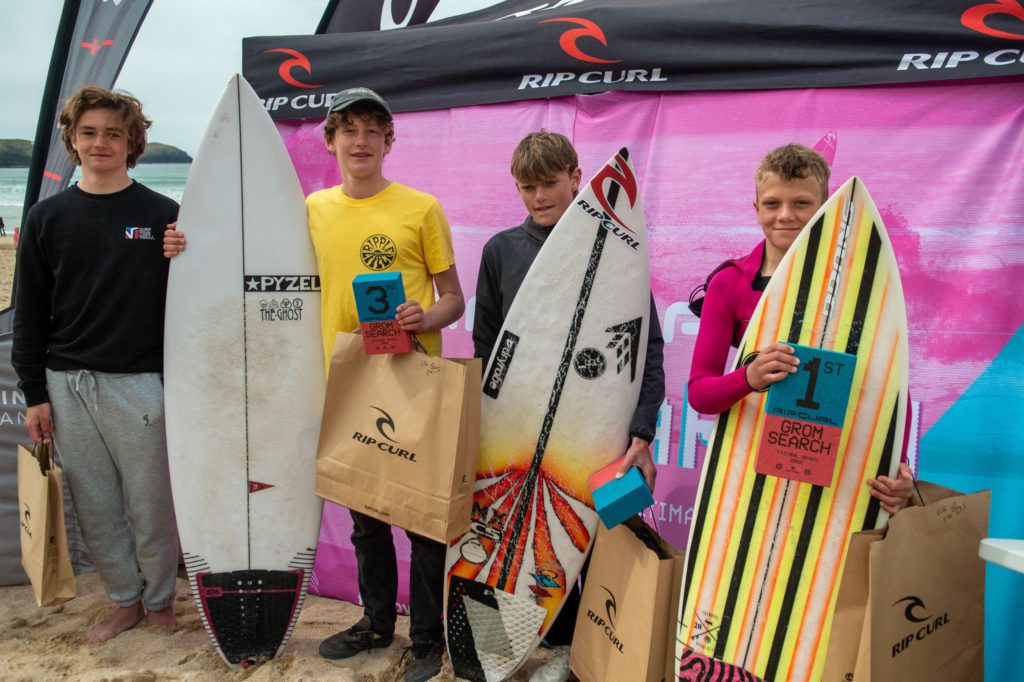 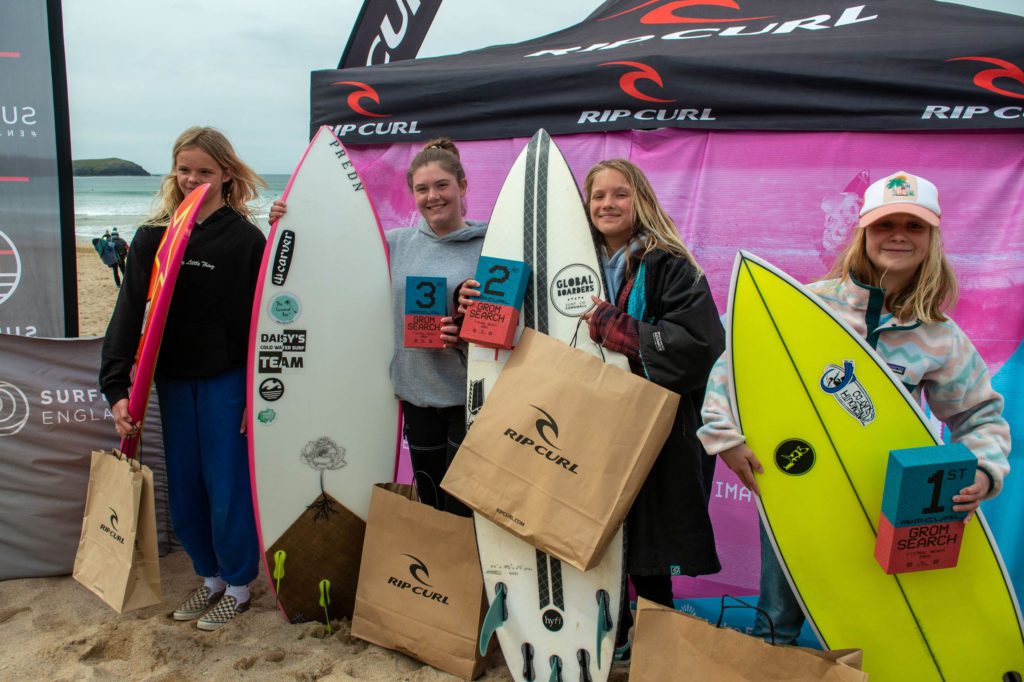 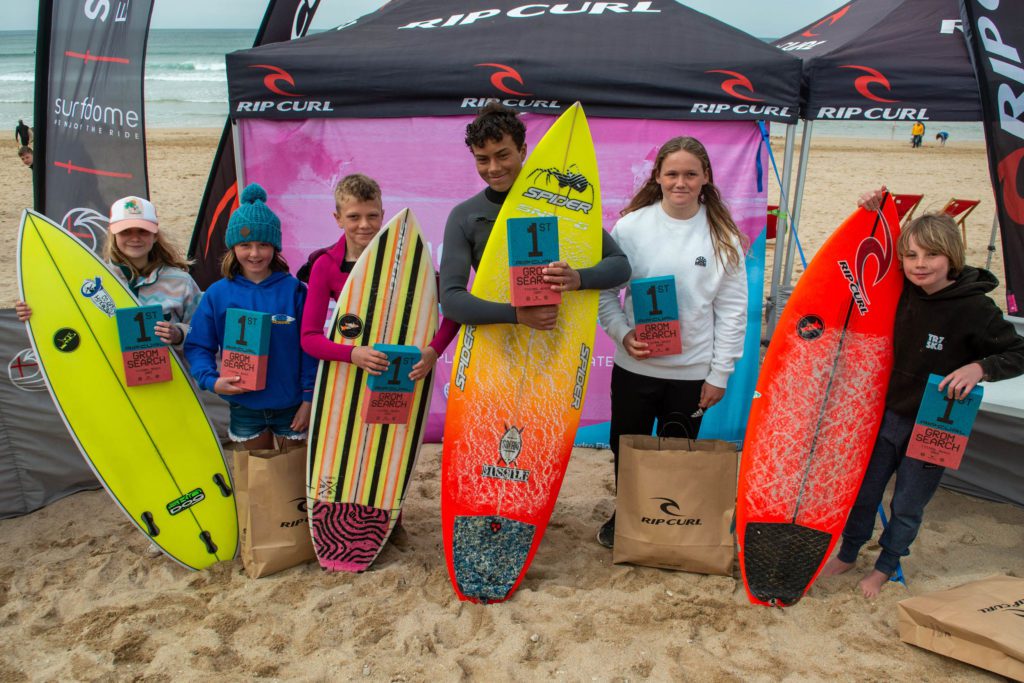 To view wave scores, progressions & get into the detail, results are published in full here.